Home/Posts/Shotcrete is a Versatile Structural Concrete Repair Material
Next

Shotcrete can be an excellent material and application method for repair of reinforced concrete structures. Properly designed and applied shotcrete has low permeability and can provide excellent repair durability. The following are repair project examples using shotcrete. 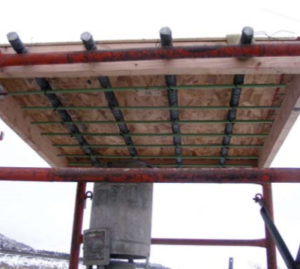 Three separate test panels were constructed. One 4 ft x 4 ft x 5-3/4 in. (1.2 m x 1.2 m x 146 mm) unreinforced lumber construction panel was prepared and shot at the repair contractor’s facility. Initial curing was completed using water foggers. Three cores were extracted for compressive strength testing and visual core grading per ACI 506.2. Visual grading showed excellent results with all cores achieving an ACI Grade 2 or better. Compressive strength testing results averaged 8180 psi (56.4 MPa). The second test panel was constructed using No. 11 (35 m) reinforcing bars at 10 in. (250 mm) on center with No. 4 (13 m) bars at 6 in. (152 mm) on center over the larger bars. The test panel size was 4 ft x 4 ft x 5-3/4 in. (1.2 m x 1.2 m x 146 mm). This panel was shot at the repair contractor’s facility and three cores were extracted including the reinforcing and visually graded by FHWA officials. All results were ACI Grade 2 or better. The third test panel was built at the joint venture contractors’ facility and was constructed using the concrete mixture design used for the original pier cap construction. The concrete panel was constructed with exposed No. 11 (35 m) bars and No. 4 (13 m) stirrup bars similar to the pier cap reinforcing steel placement. The concrete test panel was shipped to the repair contractors’ facility. Surface preparation of the 6 x 6 ft (1.8 x 1.8 m) concrete test panel was completed using a 20,000 psi (138 MPa) pump delivering water at approximately 12 gal. (45 L) per minute. The test panel was shot using the designated repair shotcrete. Initial curing was completed using fog sprayers. After 7 days of curing, shotcrete-toconcrete bond tests were completed per the ICRI guideline. An average direct tensile shotcrete-toconcrete bond strength of 259 psi (1.78 MPa) after 14 days was obtained. After completion of all the testing, the repair contractor mobilized to the project site. Surface preparation was completed by a hydrodemolition contractor per the high-pressure water specifications, similar to that used in the testing procedure. The shotcrete repair contractor installed approximately 60 ft3 (1.7 m3) of shotcrete using a dry-mix shotcrete gun driven by a 375 cfm (10.6 m3/mm) compressor. 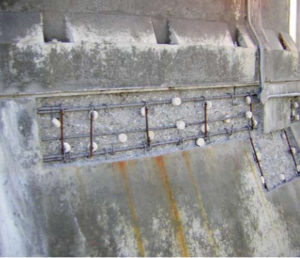 A coal-fired electrical generation station located in the desert southwestern U.S. was experiencing reinforcing steel corrosion in certain components of the concrete draft cooling towers on the property. The conventionally reinforced concrete lower rings of the fan stack assemblies were deteriorating from reinforcing bar corrosion. An investigation revealed that the wetting and drying action combined with low (3/4 in. [20 mm]) concrete cover was allowing the corrosion process to initiate. Results of the investigation revealed that approximately 15% of the 24,730 ft2 (2297 m2) of concrete area was delaminated or spalled and required repair. First, it was important to develop a repair scheme that addressed the source of corrosion. 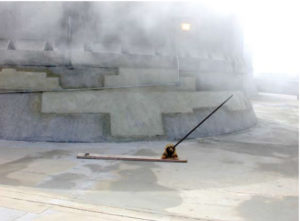 The repair scheme consisted of installing a thick epoxy coating on the inside face of the concrete assembly to cut off the vapor drive through the concrete. This work was completed during two separate 30-day plant shutdowns for maintenance periods. Once the vapor drive was shut down and the concrete humidity level was reduced, the shotcrete repairs were started. The repair material selected was a prepackaged 5000 psi (34 MPa) 28-day compressive strength product with aggregate gradation No. 1 per ACI 506. Dry-mix installation was selected due to the large number of repair locations coupled with the small average area per location. The repair locations were on a vertical surface, and the use of dry-mix shotcrete eliminated the need for the use of concrete formwork required for casting repairs. The repair material was tested for permeability. The permeability requirement allowed for compatibility with passive cathodic protection anodes installed along the perimeter of each repair location. Delaminated concrete was removed using 15 lb (7 kg) chipping hammers. Surface preparation was completed using dry sandblasting. The shotcrete was installed over a 2-week period during operation of the cooling towers. Shrinkage cracking occurred in greater amounts than normally experienced due to the elevated temperatures of the concrete substrate and the difficult curing conditions. A silane sealer was applied to the shotcrete upon full curing. Corrosion current, half cell potential, and resistance measurements were taken using a linear polarization tool prior to and after repair completion. Concrete resistance, an indirect measure of concrete humidity levels, improved nearly nine fold from 10 kilo-ohms to 90 kilo-ohms resistance. Reinforcing bar corrosion currents improved from 150 mm per year dissolution to 25 mm per year. Finally, corrosion potential improved dramatically. At the conclusion of the project, it was determined that the reinforcing steel is once again in a passivated state.

An electrical generation station in western Colorado was experiencing corrosion in the prestressing wires through sections of their precast concrete cylinder pipes. The water transfer pipes supply water between the power station and the cooling towers. During a 2-week shutdown period, testing was conducted to determine the extent of the corrosion in the wires. Testing found that one spool, an 18 ft (5.5 m) section of pipe, was compromised to the point that external post-tensioning was required. The spool ran 18 ft (5.5 m) in length, with a 9 ft (2.7 m) diameter, and was located approximately 20 ft (6.1 m) below grade. A large excavation was required to gain access to the damaged spool. The excavation was made approximately 25 ft (7.6 m) deep with a 60 ft (18 m) diameter, with sloped sidewalls for safety.

The water transfer pipe containing the damaged spool ran parallel and next to another water transfer pipe. Once the damaged spool was exposed, a trench box was placed between the two water transfer pipes for safety. Prior to complete excavation, each end of the spool was excavated and tendons were installed to help support the dead load. The spool was then fully excavated and the outer concrete shell was sound tested with the engineer of record. The investigation found that the exterior concrete shell had debonded from the interior and a large crack spanned half the circumference of the spool. It was determined that the outer shell should be removed and further examination of the crack was necessary.

The exterior shell was excavated using pneumatic hammers. Upon inspection, it was found that a significant number of prestressing wires were corroded and broken. The large crack that ran around the exterior shell continued into the interior concrete shell. Core samples were taken to determine the depth of the crack within the internal concrete shell. If the crack extended the full depth to the steel fiber liner allowing corrosion, spool replacement would be required. The core sample showed that the crack did indeed extend full depth, however, the liner showed no signs of corrosion. With a corrosion-free liner and solid inner core, a post-tension repair was viable. 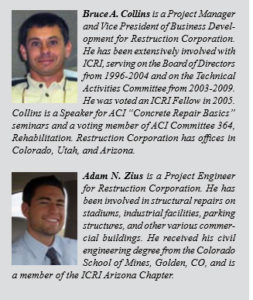 The 18 ft (5.5 m) spool was then wrapped with a total of 53-1/2 in. (12.7 mm) diameter sevenwire strands at 4 in. (100 mm) on center. The strands on each end of the spool were stressed to a force of 47 kips (209 kN), followed by a sequence of stressing every other tendon. Conductivity between the tendons and the steel liner was established and verified. Aggregate was used to fill the bottom of the excavation prior to applying the shotcrete, preventing any ground water from interfering with the mixture. A low shrinkage, fiber-reinforced wet-mix shotcrete was specifically designed for this project with the local concrete company. The shotcrete mixture was pumped through a 2 in. (50 mm) nozzle and a shotcrete cradle was created at the base of the spool. This shotcrete cradle acted as the footing, providing the necessary support to prevent slumping. The new exterior shell was shot, providing 2 in. (100 mm) of cover over the external post-tension stands. The shotcrete shell was then covered with wet burlap sacks and plastic for proper curing. Once the shotcrete shell had cured for 3 days, the excavation was filled and compacted back to the original grade.

Shotcrete is a versatile repair technique. Its physical properties provide numerous repair solutions in many different environments and situations. These three case histories provide examples of the versatility of the shotcrete process.

Interested in a career at Restruction?
Check out our careers page!